Film / The Mystery of the Leaping Fish 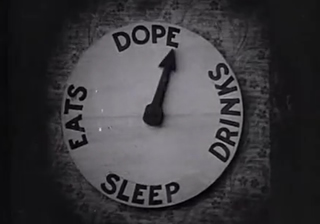 Party all the time.
Advertisement:

The Mystery of the Leaping Fish is a 1916 short comedy film directed by John Emerson, starring Douglas Fairbanks.

It is undoubtedly one of the weirdest films of the silent era. Fairbanks stars as Coke Ennyday, a goofy private detective who is asked by the local cops to investigate a newcomer to the area who is mysteriously wealthy. Coke trails the man to the beach where he discovers a drug smuggling ring that is sneaking opium into the country through the inflatable "leaping fishes" rented out to beachgoers. He falls for Inane (Bessie Love), the girl renting out the "leaping fish" floats, who is unaware of the drug smuggling and is kidnapped by the crooks when she finds out. Coke busts the opium ring, gets the girl, and has a Happy Ending.

He also shoots up cocaine. A lot. Coke really, really loves cocaine (his name is Coke Ennyday, for God's sake). He has a clock on the wall marked off, by the quarter hour, with "EATS", "SLEEPS", "DRINKS", and "DOPE". He has a giant bowl of cocaine on his desk that is actually labeled "COCAINE". Coke is constantly injecting himself with cocaine and laughing like a maniac. In the latter portion of the film he gets so high that he starts constantly jumping up and down and literally bouncing off the walls. Coke defeats the bad guys not by fighting them or anything, but by injecting them with cocaine and getting them as high as he is.

In other words, this film averts the Drugs Are Bad trope. This weird, weird movie is one of the most memorable short comedies of its era and an interesting artifact from the days before drugs like cocaine and heroin were criminalized. Rob Zombie, of all people, has cited this

as one of his favorite films.