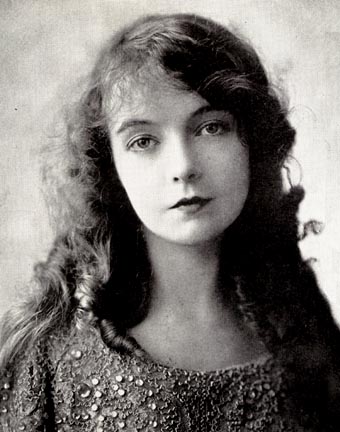 "Those little virgins, after five minutes you got sick of playing them—to make them more interesting was hard work."
— Lillian Gish
Advertisement:

Lillian Diana Gish (October 14, 1893 – February 27, 1993) was a pioneering American silent film actor known for her waif-like, innocent characters and for being a favorite of D. W. Griffith.

Gish was one of the most popular silent screen icons of the 1910s and enjoyed a long career that spanned over 75 years, the longest of any screen legend male or female

, making her one of the few actors whose careers were able to survive the transition from silent film to sound. She is also considered to be one of the first actors to really understand the difference between stage and film acting and modify her performances accordingly. (Other actors in the early days of silent film gave, let's say, "larger" performances.)

Gish starred in the infamous The Birth of a Nation and outright refused to acknowledge that the film was racist, staunchly defending her dear friend and mentor D. W. Griffith until the very end. She also worked with Griffith many other times, including a small role in the classic Intolerance and main roles in Broken Blossoms, Orphans of the Storm, and perhaps most famously Way Down East, the climax of which required her to lie still on a very real ice floe for hours on end while her hair and right hand were submerged in below-freezing water. Thanks to the stunt, Gish's hand would be partially impaired for the rest of her life, but she contributed to what is considered one of the most exciting climaxes in cinema history.

Her last silent film, The Wind, was one of her best. After her talkie debut One Romantic Night landed with a thud in 1930, she made only one movie over the next twelve years. Instead, she did a lot of theater work, appearing in the original cast of Pulitzer Prize-winner All the Way Home and many other stage productions. As she got older she returned to films as a character actor, appearing in several supporting roles in major sound films, most importantly the Cool Old Lady Rachel in The Night of the Hunter. Her last two film roles came when she was in her 90s: in Sweet Liberty, alongside Alan Alda, Michelle Pfeiffer and Michael Caine; and two years later in The Whales of August, alongside Bette Davis and Vincent Price.

Despite her somewhat controversial views on politics, sexual and otherwise (she was born in the late 19th century, after all), her prudish utterances did not stop salacious Hollywood-insider rumours over her exceptionally close relationship with her sister Dorothy (also an actress), but she was still adored by fans for her humble attitude and unfailing generosity towards them. She received an Honorary Academy Award in 1971 and an AFI Life Achievement Award in 1984, and is #17 on AFI's list of the 25 Greatest Female Stars of All Time.

The Smashing Pumpkins' debut album Gish was named after her. Billy Corgan says it's specifically a reference to his grandmother telling him about Gish once passing through her hometown, a "middle of nowhere" insignificant location, on a train.

Lillian Gish films on the wiki: