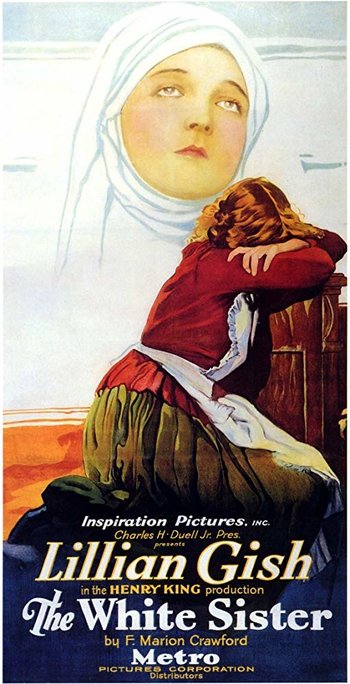 Behold, another silent film about Lillian Gish being sad!
The White Sister is a 1923 silent film starring Lillian Gish and Ronald Colman. It was adapted from the F. Marion Crawford novel by the same name, which was previously adapted as a film in 1915 (this version is missing presumed lost). In 1933, the novel received a third adaptation, as a talkie directed by Victor Fleming starring Helen Hayes and Clark Gable. Additionally, a Mexican version was made in 1960.
Advertisement:

Set (and filmed) in Naples, Gish is an Italian aristocrat named Angela Chiaromonte and Colman is the dashing Captain Giovanni Severi. They are very much in love, of course. After the death of Angela's father, Prince Chiaromonte, she is cheated out of her entire inheritance by her jealous half-sister, the Marchesa di Mola. But Angela doesn't care about that as she still has Giovanni. He has to go off on a military expedition to Africa, but she promises to wait for him. When she receives word that he was killed by Arabs, she has a mental breakdown. She recovers in a Catholic hospital run by the "white sisters," a.k.a. nuns. Wanting to give back and not wanting to marry any man other than Giovanni, she decides to become a nun herself. But oops, turns out Giovanni is still alive.

Having been released in 1923, The White Sister entered the Public Domain in 2019.