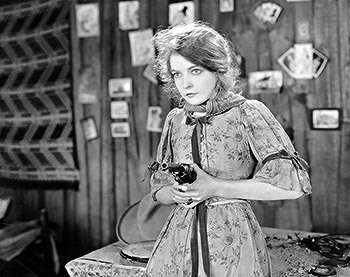 Lillian Gish has had enough.
Advertisement:

The Wind, based on a novel by Dorothy Scarborough, was one of the great masterpieces of the late silent era. Lillian Gish plays Letty Mason, a sheltered, naive young woman from Virginia who goes off to live with her (male) cousin Beverly and Beverly's wife Cora on their farm in Sweet Water, in the flatlands of West Texas. On the train, Letty meets and is attracted to a handsome but lecherous man named Wirt Roddy (Montagu Love). Letty does not particularly like Sweet Water: Cora is jealous of her husband's interest in Letty, Letty is not interested in either of the two locals who want to marry her, and worst of all, Sweet Water is in the middle of a desert that is struck with almost unending, constantly blowing wind that Letty finds extremely unsettling.

After a particularly bad cyclone blows through town, and after Cora demands that Letty leave her house, Letty accepts Wirt's proposal—except that Wirt is already married and simply wants her to run away with him. She marries Lige Hightower (Lars Hanson), one of her two local suitors, because she has no other choice. Lige is a good man and desperately in love with Letty but she has no interest in him, and eventually tells him so. Crushed, Lige agrees to send her away. But Letty hasn't seen the last of the wind, nor of Wirt, who won't take no for an answer...

The Wind was Lillian Gish's last silent film and one of her last starring roles. It was inducted into the National Film Registry in 1993.

Not to be confused with the 2018 horror film The Wind.