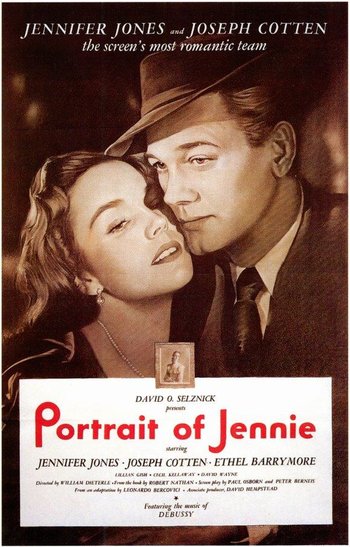 "There is no life, my darling, until you love and have been loved. And then there is no death."
— Jennie Appleton
Advertisement:

Portrait of Jennie is a 1948 film based on the novella by Robert Nathan, directed by William Dieterle and produced by David O. Selznick. It stars Jennifer Jones as the title character (a coincidence, not The Danza) and Joseph Cotten as Eben Adams, the artist she inspires. Also in the cast are Ethel Barrymore and Lillian Gish.

New York City, 1934. The Great Depression rages on, and Starving Artist Eben Adams (Cotton) can't sell any of his landscape paintings. One gloomy winter day, he meets a young girl named Jennie Appleton (Jones), who mysteriously disappears before he can get to know her more. Finding her an interesting subject, Eben sketches her and is able to impress art dealer Miss Spinney (Barrymore) and sell his sketch. Eben makes it his mission to find Jennie again and have her sit for another portrait. But Jennie is no ordinary girl: she's eternally stuck in the past, yet able to grow and become a young woman very quickly. She and Eben know they are soulmates, but the cost of being together may be too high.

Promoted as a "fantasy," Portrait of Jennie combines drama, mystery and romance with more than a touch of the supernatural. Its extremely striking and atmospheric cinematography won Joseph H. August an Academy Award (unfortunately, he died before receiving it).

The titular portrait of Jennie was painted by Robert Brackman.