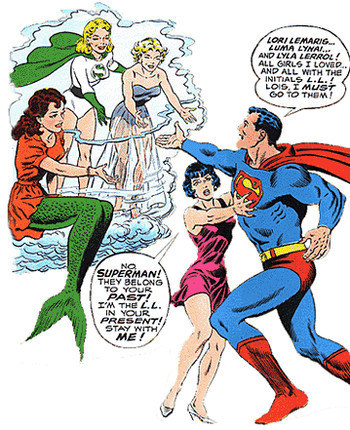 Next, Superman will watch a Lindsay Lohan movie, write a love letter to Lex Luthor while listening to LL Cool J, become a limited liability, read Lords and Ladies, and visit Linkara.note Because he's Lewis Lovhaug.
"There certainly do seem to be a lot of people with the initials 'J.S.'"
— Justice Strauss, A Series of Unfortunate Events
Advertisement:

In which several characters from the same work share a set of initials. Disproportionately likely to be the author's own initials; otherwise, usually signals common ground of some kind. The characters themselves may or may not notice.

Allegedly it comes from a dream Michael Stipe had: he was at a party where everyone else had the initials L.B.