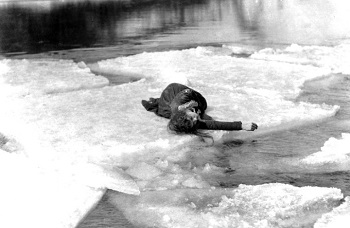 Brr.
"This man, an honored guest at your table, why don't you find out what HIS life has been?"
Advertisement:

Way Down East is a 1920 Tearjerker Melodrama film, directed by D. W. Griffith and starring Lillian Gish. It was adapted from a popular 1890s stage play by Lottie Parker.

Anna Moore (Gish) is a simple country girl who lives with her mother. They are dirt poor, so she goes to the city to ask her wealthy relatives, the Tremonts, for help. After arriving there she meets Lennox Sanderson (Lowell Sherman), a rich playboy and cad who sets his sights on Anna as a conquest. Anna is a virgin, though, so Lennox resorts to arranging a fake marriage in order to get Anna to go to bed with him. He stashes her away in the country and uses her as an occasional booty call until she tells him she's pregnant. Lennox then reveals that the marriage was a sham, and leaves Anna forever.

Things go from bad to worse when Anna's mother dies, which casts her adrift. The baby she conceived with Lennox also dies, right after it's born. A desperate Anna wanders to the country farm of Squire Bartlett, where she gets a job as a domestic and a place to belong. She also attracts the attention of the Squire's handsome son David, played by Richard Barthelmess, who had previously costarred with Gish in Broken Blossoms. Unfortunately it turns out that Lennox Sanderson owns the property next to the Bartlett farm. And there are others who know Anna's secret.

Even in 1920, Way Down East was old-fashioned and hokey, based on a play that dated back to the Victorian era. Yet the film is buoyed by Griffith's utterly sincere direction and Gish's fearless performance. It is best known for the memorable climax in which Anna, who has been cast out of the Bartlett home, stumbles out into a raging winter storm, finally falling down on an ice floe in the river. The ice then floats downstream to the falls, while David jumps from ice floe to ice floe, racing to save Anna. Except for one shot (the one at the edge of the falls), this climactic sequence was shot in a real storm, in brutal cold. Lillian Gish really had icicles forming on her face. She suffered permanent nerve damage in her hand from dangling it in the freezing river as she lay on the ice floe.

A sound remake was produced in 1935, with a young Henry Fonda in the cast.