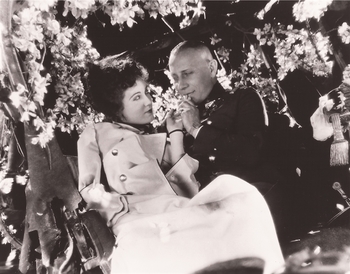 The Wedding March is a 1928 silent drama film written by, directed by, and starring Erich von Stroheim. It also features 19-year-old Fay Wray (King Kong) in her Star-Making Role.

Vienna, in the summer of 1914 (in other words, right before the start of The Great War): Prince Nickolas von Wildeliebe-Rauffenburg, aka "Nicki" (von Stroheim), is a cavalry officer in the Austro-Hungarian army, and the scion of a noble family that has seen better days. In fact, the von Wildeliebe-Rauffenburgs are pretty much broke. His money-hungry parents wind up arranging a marriage between Nicki and Cecelia Schweisser (ZaSu Pitts, from von Stroheim's Greed), the daughter of a nouveau riche magnate who has made a lot of money selling corn plasters.

While his parents are making this happen, however, Nicki the dissipated wastrel finds true love for the first time, in the person of Mitzi (Wray), a commoner. Mitzi has been promised in marriage as well, to a crude, boorish, brutish butcher named Schani (Matthew Betz). Mitzi and Nicki pledge eternal love to each other, but their families are determined to separate them.

Like every other film in von Stroheim's career, The Wedding March was a Troubled Production. Shooting lasted from June 1926 until January 1927 and cost over a million dollars, a huge investment in both time and money for the 1920s. Editing lasted another year, at which point von Stroheim had managed to cut his mountain of footage to six hours. Paramount Pictures took the footage from von Stroheim and gave it to Josef von Sternberg, who edited it down further. The footage was cut into two films, The Wedding March and a sequel, The Honeymoon. Unfortunately The Honeymoon is a lost film, the only known copy having burned up in a Paris fire not long after von Stroheim's death.