Film / The Symbol of the Unconquered 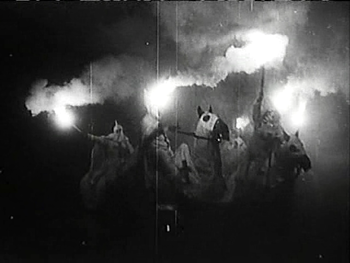 Be strong my child and remember that in the worst moments of distress... you must never, never despair!
Advertisement:

The Symbol of the Unconquered is a 1920 film directed by Oscar Micheaux. It's a Race Film aimed as a Take That! against The Birth of a Nation. It is his second Take That! at the film after Within Our Gates, which was released ten months earlier.

The story stars Eve Mason, a young black woman who inherits a cabin and a large amount of land after her grandfather's death. Eve soon leaves Alabama for her inheritance. She moves northwest to the fictional town of Oristown. Her first night in town, Eve tries to stay at Driscoll Hotel but its owner, Jefferson Driscoll, hates black people and forces her to sleep in the barn. The irony of the situation is that Jefferson himself is part-black and passing as white.

The next morning Eve comes across a young prospector named Hugh Van Allen. It turns out they're neighbors and the two become friends.

Trouble quickly ensues when two criminals, August Barr and his friend Tugi, want Eve's land. Things get worse when the duo enlist the help of the Ku Klux Klan. In the end, the Klan is run out of town and all is well.

The only surviving print of the film is a version with French and Flemish intertitles. It's an incomplete copy with a few missing scenes.