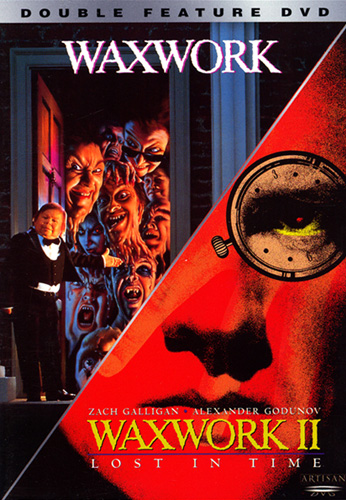 A mysterious wax museum shows up in a suburban neighborhood one night. Mark and his friends are naturally curious about it, but they soon find out the owner's true intentions. It turns out anyone who enters the museum dies after being sucked into one of the displays. When the right amount of people die in the museum, all of the waxworks will come to life and help the owner take over the world.

Thankfully, Mark's grandfather and his friends have been on the owner's tail for decades and are ready to help Mark and his girlfriend, Sarah, fight against the waxworks.

A sequel, Waxwork II: Lost in Time, was released in 1992. It takes place immediately after the first film, with Sarah's father being murdered by a wax hand that escaped destruction hours before. Sarah's case for her innocence looks bad, thanks to no one believing her and Mark's claims about the wax museum or disembodied hands. When they go to Sir Wilfred's mansion, they find a magic compass that allows them to travel through time. Believing it can be used to get evidence for the trial, the two of them start going through time and space while ending up in sci-fi and horror film parodies along the way.

This contains examples of: