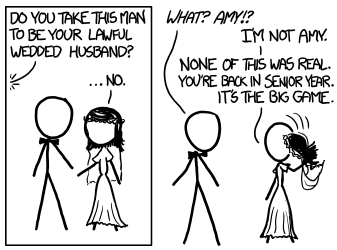 Alcazar: We all have needs. I needed five weirdos to scrub my five castles. [...]
Leela: But why all five weddings on the same day?
Alcazar: You know the price to rent a tux that changes shape?
— Futurama, "A Bicyclops Built for Two"
Advertisement:

Congratulations! Two lovers have just tied the knot... Except it turns out they haven't really. The wedding was not real and the marriage is therefore not valid.

Either the bride or the groom was tricked by the other into believing the wedding was real. It gets revealed it was all a sham and the wronged party feels terribly betrayed. One potential reason for this is that one party is already married or has a second family: in most countries that have bigamy laws, the second marriage is automatically void.

In cases of a fake wedding done for tricking the parents who for some reason want their child to be married (and where both the bride and the groom know it is a fake ceremony), or to milk their family and friends for nice presents. However, they don't get married for real.

Judy considers having a "shadow wedding" to lure Kathleen away from the real wedding so she doesn't ruin Wolf and Honeybee's wedding.

Judy considers having a "shadow wedding" to lure Kathleen away from the real wedding so she doesn't ruin Wolf and Honeybee's wedding.