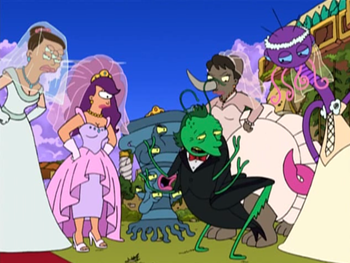 "Do you know how much it costs to rent a tux that changes shape?"
Advertisement:

This Episode Has Been Modified To Fit Your Primitive Screen

Leela meets Alcazar, who claims to be another cyclops from their home planet of Clycopia. Alcazar convinces Leela to sleep with him, as they are the only hopes of restoring their race. The next morning, Alcazar turns out to be a huge jerk, and the story shifts from a romantic space opera to a lowbrow dysfunctional family sitcom very reminiscent of Married... with Children. Can Leela overlook that for the sake of the species?