Is The Answer To This Question "Yes"? 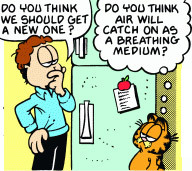 "Does a bear shit in the woods?"
Advertisement:

A rhetorical question used in place of "yes" when "yes" is the obvious answer to a given question. The standard form is "Is the sky blue?" with common variants including "Is the Pope Catholic?" or "Does a bear shit in the woods?". Bonus points if someone then points out a relevant exception to the obvious statement. A deviant form is to mix two such questions while pretending the answer is still "yes", like "Does the Pope shit in the woods?"

Closely related to Ask a Stupid Question.... The inversion is also common, with a question like "Are pigs capable of flying?" (The answer to such questions is no. Both of these versions may be followed by a surprising exception or counterexample, but they don't have to be.)