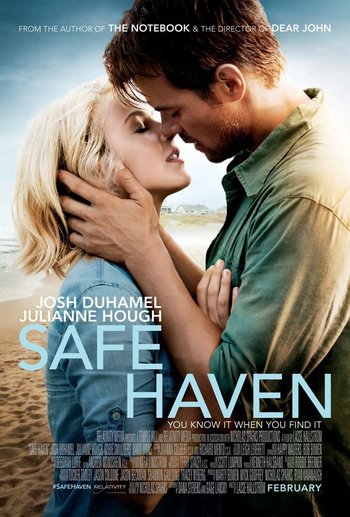 You know it when you find it.
Safe Haven is a 2010 Romance novel by Nicholas Sparks. It tells the story of a young woman, Katie, who escapes her abusive ex-husband, Kevin, and relocates to a small North Carolina town. Following her relocation, she begins to fall for Alex, a widowed father with two children. Trouble ensues as Kevin finds her there and plans on killing the two new lovebirds.
Advertisement:

The book was adapted to film in 2013, directed by Lasse Hallström and starring Julianne Hough and Josh Duhamel.

The novel and the film contain the following tropes: