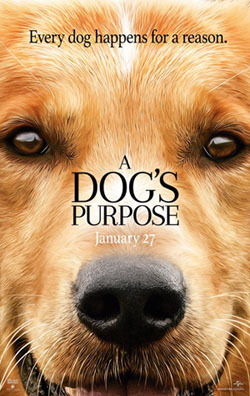 "If I can get you licking and loving, I have my purpose."
— The Aesop of Dogs
Advertisement:

A Dog's Purpose is a 2017 film based on W. Bruce Cameron's 2010 novel of the same name, produced by Universal and Amblin Entertainment.

A dog discovers, after his short life as a stray, that he's been reborn into a new life. His second is much longer and more meaningful: a full life with a family and a special bond with the boy, Ethan. That's not the end of his journey, however, and as it happens again and again, he wonders: what's his purpose for being here?

The film was directed by Lasse Hallström, and starred Dennis Quaid as Ethan and Josh Gad as the voice of the main character (for the sake of clarity, he's referred to as "Bailey" here, as that's the name he has the longest and identifies most as).

A sequel called A Dog's Journey (the same name as the novel) premiered in May 2019 with Quaid and Gad reprising their roles. As in the novel, A Dog's Journey focuses on Bailey finding a new purpose: taking care of Ethan's granddaughter CJ (Kathryn Prescott).