"I always find a book to be that much more compelling when a character stands to lose everything." 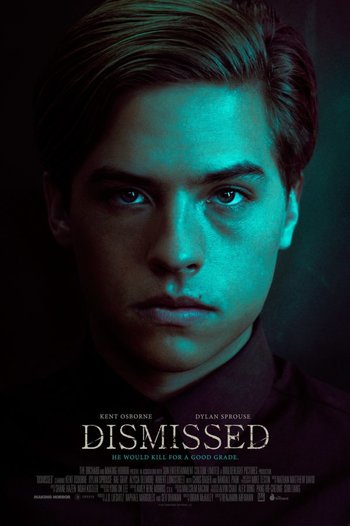 What a nice looking kid.
Advertisement:

Disillusioned English teacher David Butler (Kent Osborne) works at a high school where the student populace is largely disinterested in Othello, English literature, and academics overall. That is, until, transfer student Lucas Ward (Dylan Sprouse) shows up in his class. Bright, driven, and charming, Lucas quickly becomes one of his favorite students, until he turns in a paper in defense of Iago and is given a B+. Hellbent on getting his grade changed to the A he feels he so rightly deserves, Lucas quickly shows he will stop at nothing to get what he wants, a determination that spells out nothing but trouble for David.

Dismissed is a 2017 independent thriller/horror film, marking Dylan Sprouse's return to acting after a six year hiatus. It premiered at the Sundance Film Festival on October 27, 2017, and was released worldwide through digital media and video on demand on November 21st of that year. On February 19th, 2018, "Dismissed" was released on Netflix.