Attack of the Town Festival 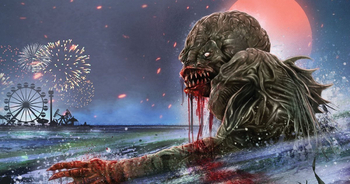 The festival always brings in all kinds of out-of-towners...
"By the way, the festival was supposed to occur on the day the world ends up ending. And it's the Moon Festival, go figure. Yay, irony! (as Shigeru Miyamoto) Miyamoto like irony."
— JesuOtaku's Let's Play of The Legend of Zelda: Majora's Mask
Advertisement:

A common plot in Attack of the Killer Whatever movies. The town that is under attack happens to be holding a festival. Generally this is accompanied by an official that refuses to cancel the town festival for economic reasons. This in turn puts the public at risk and the hero of the story now has a whole town to protect from the fearsome people-eating whatever.

Bonus points if the festival in question features some theme, object or commodity (besides potential victims) which would naturally attract the Killer Whatever. Double bonus points if the festival is a masked event, and the attackers are taken as masks by the members of the public (until they are being eaten, that is) and become a Needle in a Stack of Needles for the heroes.

In many a fantasy RPG, this trope often overlaps with Doomed Hometown, with the doom in question (usually an invading horde of mooks working for the Big Bad) falling upon the town during a local festival.

See also Horror Doesn't Settle for Simple Tuesday for the holiday variant. Not to be confused with A Fête Worse than Death, where the festival is itself the threat.