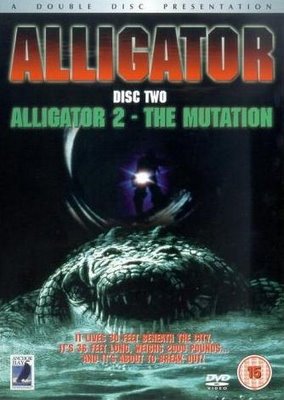 Never Smile at a Crocodile, but what happens when it smiles at you?
It's 36 feet long, weighs 2000 pounds, lives 50 feet below the city. Nobody knows it's down there except the people it eats.
— Tagline
Advertisement:

Alligator is a 1981 horror/comedy film, directed by Lewis Teague and starring Robert Forster, Robin Riker, and Henry Silva, with a screenplay by John Sayles, in which Chicago policeman David Madison has to stop "Ramon", the eponymous beast, who is running amok in the city sewer system after feeding on covertly discarded growth hormone. The film is notable for being among the first of the slew of Jaws homages/rip-offs to be produced by the American movie industry. Unlike 99% of the horrors that have come lurching along in its wake, the humor is intentional, the human characters are sympathetic, and the flick is worth seeing.

A sequel/remake was released in 1991, subtitled The Mutation.