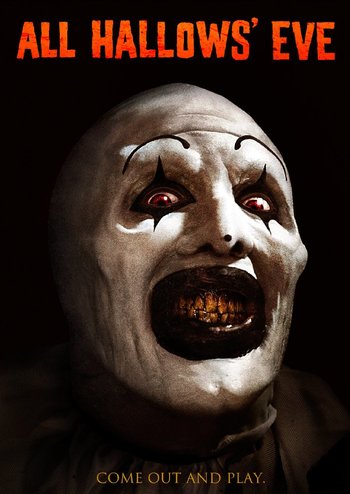 Yeah ... no thanks.
Advertisement:

A 2013 pseudo-anthology film directed by Damien Leone. "Pseudo-anthology" because the segments in the film, sans the second one, were released as discrete shorts prior to the release of the movie.

It's a quiet Halloween night, and Sarah is babysitting her friend's children, Timmy and Tia. She finds a videotape in Timmy's bag, which contains three tales of murder and mayhem all linked together by a Monster Clown known only as Art. As the night goes on, the line between reality and fantasy begins to blur as Art slowly creeps his way into our world.

All Hallows' Eve contains examples of:

All Hallows' Eve 2 contains examples of: