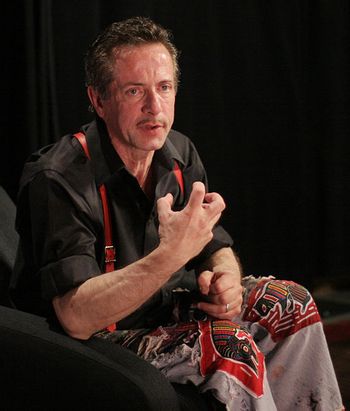 "I have seen the future of the horror genre, and his name is Clive Barker."
— Stephen King
Advertisement:

Clive Barker (born October 5, 1952) is a British horror and dark fantasy author responsible for over a dozen novels, several movies, a few graphic novels, some artwork, and a couple of video games as well. His works almost always feature sexual overtones that are graphic, disturbing, and disgusting in nature. His stories are usually set in a contemporary urban setting, but with Another Dimension or many dimensions. On the Sliding Scale of Idealism Versus Cynicism, his stories lie pretty far on the cynical side, with heavily flawed but sympathetic protagonists and an overall dark and gritty tone, although some of his novels have had happy and magically enchanting endings, and have featured themes such as love and redemption.

Barker is also an artist, with some of his paintings having been featured in galleries in the United States, as well as illustrating the covers of his own books. He has also created characters and series for comic books, and some of his stories have been adapted to the medium. He has a nearly half-century long friendship and artistic partnership with Hellraiser star Doug Bradley, the two having met when they were in secondary school and collaborated on dozens of projects since.

Some of Clive Barker's works include:

Tropes featured in Clive Barker's body of work include: