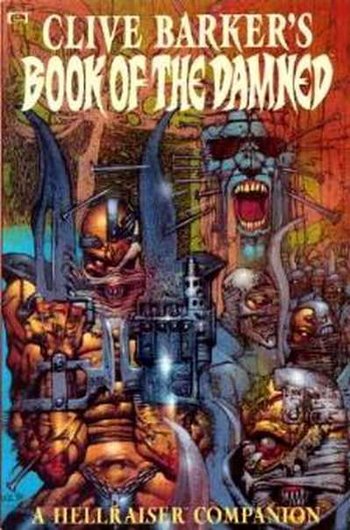 Clive Barker's Book of the Damned: A Hellraiser Companion - Issue #1

With a brush and a warm, wet vehicle of color, we've painted a rich nightmare bourne of the fertile mind of Clive Barker. On an aging skin-like parchment, its deathless denizens have scrawled chapters, notes of warning to those who have already come too far. Using hammers and hooks, we've built an intricately leveled hell, repleat with multiple complexities, and a million inescapable horrors.

With a short-breathed word of warning, we invite you to open the first Book of the Damned, testament to the terror and majesty of Leviathan.

Clive Barker was a consulting writer expanding the Hellraiser mythos. This 4 issue series (1991-1993) was published by Marvel Epic Comics.