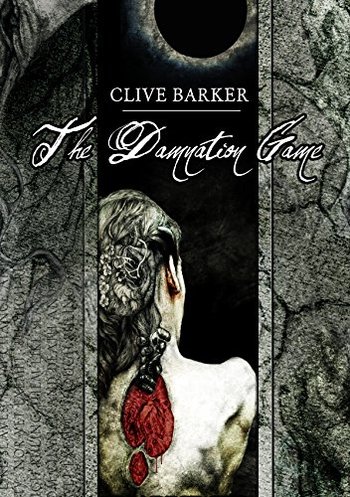 I wanted to do a covenant with the devil story without a devil. One of my favourite revelations in the book is when they finally work out that 'they have no devil on their back, just old humanity, cheated of love and ready to pull down the world on its head'. I like that. If finally we look for a source of malice, we look for lovelessness... Obvious pains. On top of these obvious pains come elaborate configurations.
—Clive Barker

The Damnation Game is a 1985 horror novel by Clive Barker. It was published just after Barker had achieved commercial and critical success with his horror short story series The Books of Blood, making it one of his earliest works and his first novel.

In prison for a robbery he committed to pay off a gambling debt, the odds seem to finally turn in Marty Strauss's favor when he's offered a rare deal: he can work off the remainder of his prison sentence as a bodyguard for the eccentric billionaire Joseph Whitehead. Strauss settles in comfortably at Whitehead's compound and finds his job to be pleasantly cushy, but there's quite a bit that's off. Whitehead lives in a state of paranoia that isn't explained away by just being a rich corporate magnate in the public eye, and there's something rather unwholesome about Whitehead's relationship with his daughter, Carys, who lives an isolated life and endures an untreated heroin addiction. Whitehead's close friend and associate Mr. Toy disappears for seemingly no reason. And, worst of all, Marty has an encounter with an ascetic man named Mamoulian, who has the power to conjure illusions, read thoughts, and even raise the dead (sort of), and who apparently made some kind of agreement with Whitehead in the ruins of Warsaw in 1945...

A bestseller, The Damnation Game further cemented Clive Barker's already established reputation as an up-and-coming star of the horror genre. Since it is not-for-young-adults Clive Barker, of course, expect Nausea Fuel, Body Horror, and explicit sexual themes with a good helping of Fan Disservice.

The Damnation Game contains examples of the following tropes: