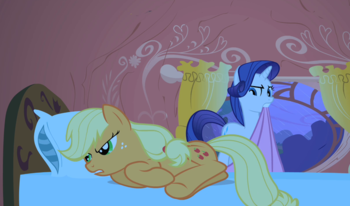 Lots of things can happen at a Slumber Party...Wild Teen Partying, a Childish Pillow Fight or a Fanservice Faux Fight, gossiping and chit-chatting, and passing (or failing) of The Bechdel Test... and then there's this trope.

A character reveals that the slumber party she (and usually, it is she) is attending or hosting is the first sleepover she has ever been to. Usually, they happen to be at least in their early teens or even older, and are at an age where most of their peers have already been to sleepovers. This trope is used to establish them as socially awkward.

The trope is usually the result of several things: The kid whose first sleepover it is is a nerdy bookworm type, or perhaps she has overprotective parents who sheltered her from other kids to a fault. Or s/he might be perceived as a loser by the more popular crowd.