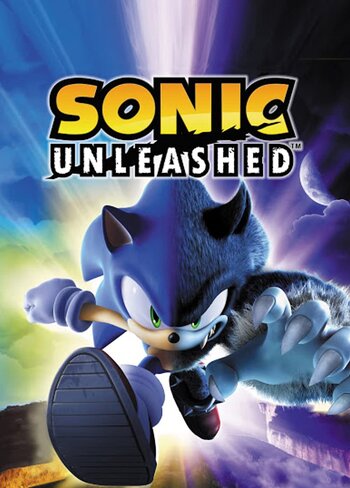 The difference is night and day.
"Sonic is on a race against time to save the world... and himself!"
Advertisement:

Sonic Unleashed is a console game in the Sonic the Hedgehog series, released for the Xbox 360, PlayStation 3, Wii, and PlayStation 2. It was released in November 2008.

Mad Scientist Dr. Eggman has a new plan to Take Over the World: using the Chaos Emeralds to release a titanic abomination called Dark Gaia from its imprisonment, then building his new empire on the ensuing ruins.

Eggman is successfully able to capture Sonic, drain the Chaos Emeralds of their energy and use them to power a big honking laser beam that awakens Dark Gaia and shatters Earth into seven pieces. However, this plan has an unintended side effect: caught at the source of the blast, Sonic is bathed in negative energy and develops an awkward case of lycanthropy.

Cursed into the form of a "Werehog" and cast down to the fragmented surface, Sonic must now do what he does best: foil Dr. Eggman by recharging the Chaos Emeralds and putting the world back together one continent at a time. Helping him is Chip, a small critter with amnesia and a mysterious connection to Dark Gaia.

Unleashed is actually technically two games — the version released on Xbox 360 and PlayStation 3 was developed by Sonic Team, while the PlayStation 2 and Wii versions were developed by handheld Sonic developer Dimps. While they all share the same story, similar gameplay mechanics, and level names; the actual design of the levels, as well as the way the player progresses from one to the next, is different between the two versions.

The gameplay of the daytime stages would be carried over to the Wii version of its sequel Sonic Colors, which many describe as "Sonic Unleashed minus night stages."

This game was eventually released in Japan as Sonic World Adventure, which was the former localized title for the game before the name change.

Sonic Unleashed has an accompanying short called Sonic: Night of the Werehog.

What do you figure that was all about? The hair, and those arms, and... and look at the tropes!

Combined with "Villains Want Mercy", Eggman begs for Sonic to go easy on him and wants to turn over a new leaf, however, this turns out to be a plan to lure Sonic into a trap and drain him of his Super form.

Example of:
I Surrender, Suckers

Combined with "Villains Want Mercy", Eggman begs for Sonic to go easy on him and wants to turn over a new leaf, however, this turns out to be a plan to lure Sonic into a trap and drain him of his Super form.