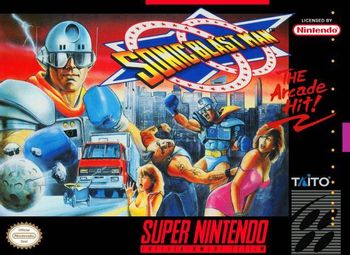 Sonic Blast Man is a series of video games created by Taito. It first began in the arcades where you play as the titular superhero in a "Test Your Strength" style game where you must punch targets by hitting a pad hard enough. Each target will have a certain amount of resistance, and you're only allowed three hits. It came to the SNES in the form of a Beat 'em Up with the arcade's levels being treated like bonus stages after each round. Both versions of the game got a sequel, which are Real Puncher, featuring a redesigned punching bag, new characters and scenarios, also the ability to take pictures of yourself via the mounted digital camera above the screen to "punch yourself", but only released in Japan and Europe possibly because of not meeting American safety standards, and Sonic Blast Man II, featuring new characters and improving the gameplay mechanics.

No relation to a certain blue insectivore, or even one of his games.