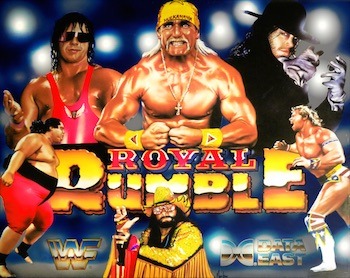 LET'S GET READY TO RUMBLE!
"It's time for the WWF Data East Royal Rumble!"
Advertisement:

WWF Royal Rumble is a Licensed Pinball Table from Data East, and is the second and final widebody game from the company.note The first one was Guns N' Roses (Data East). Released in 1994, it was designed by Tim Seckel and Joe Kaminkow, with artwork by Paul Faris and Markus Rothkranz.

Just like the real Royal Rumble, this is a battle royal featuring competitors from WWE's roster of top wrestlers. Make key shots to collect all nine wrestlers on the card (Tatanka, Yokozuna, Doink the Clown, Bret Hart, Jim Duggan, Lex Luger, Big Boss Man, Shawn Michaels, and Brian "Crush" Adams), then start multiball and make the wrestlers' shots to collect the jackpots. As the game shakes with each blow, raise your score with various activities like a No-Holds Brawl, Search for Doink, activate Pandemonium, Raise the Undertaker, and try for the Championship Belt. If you can survive Yokozuna's Banzai, Macho Man's Macho Madness, and everyone's favorite Chair-Bashing moves, move on to the Royal Rumble and see if you've got what it takes to eliminate all nine wrestlers and become the last man standing.

Due to Data East's ignoble market reputation and the theme itself, many pinball players dismiss WWF Royal Rumble without even trying the game. Those who have played it consider it an overlooked gem, jammed with lots of action-packed features, a fully-loaded audio-video package, and all of the thrills and excitement of its Professional Wrestling source. If there are any complaints, they are that the unnecessary widebody design slows down the gameplay a tad, and that some of the shots are a little too easy. Even so, this remains one of the best pins from Data East's brief legacy.

WWF Royal Rumble lays the smackdown on the following tropes:

"Get back into the ring!"