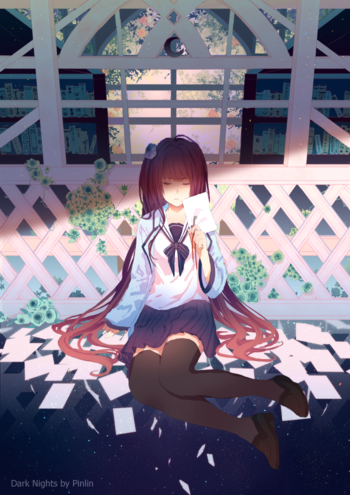 Miyoko, the protagonist of the game
"You live in a small, peaceful village. Every day is the same as any other; boring. Right when you wish for something exciting to happen, strange things start to occur, stemming from the nearby forest. If that isn't enough, the locals have begun disappearing. At the same time you meet four mysterious guys. Will you discover the truth before becoming the next target?"
— Blurb from itch.io page
Dark Nights is a 2019 visual novel created by Pinlin, made on the
Advertisement:
Ren’py engine

. It is a mystery, otome visual novel with horror elements.

You play as Miyoko, a bored daredevil who lives in a town where locals are mysteriously disappearing and then getting murdered. Miyoko chooses to investigate one of the four mysterious men that appear around town during this period: The blunt and dismissive Zeikun, quiet gentleman Junoru, the lost little boy Sachiro and the care-free and friendly Kurato. As Miyoko delves further into her investigation, she realises the dark secrets the town is hiding.

Dark Nights was released on the 31st October 2019 and can be downloaded here.