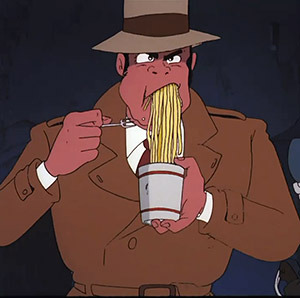 A stock anime visual, when a character eats ramen by slurping it up in a single long, flowing mass. If interrupted during this process, they'll often stop mid-slurp and turn to look at whatever distracted them, resulting in a waterfall of noodles overflowing out of their mouth and down over their chin (this is usually their cue to realize what they've done and suck the hanging ramen into their mouth). Since this is hardly the most dignified of things to do, it usually helps emphasize the character's immaturity or childishness. If they're slurping from a styrofoam instant noodles cup, it carries an air of patheticness as well.

In many Korean Series, it is used to show the difference between commoners and the rich.

In certain Asian countries, this is actually considered good etiquette — if you were really enjoying the food, you would get ahead of yourself and get sloppy, right? In Japan itself there are some older folk who hold that slurping makes the ramen taste better, similar to the 'bubbling' of wine tasting. There's also an entirely practical matter of not scalding one's mouth: ramen is traditionally served and eaten very hot, close to the boiling temperature, so slurping cools the noodles and broth, allowing you to eat them without getting scalded.