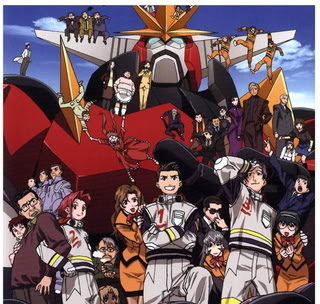 To Serve and Defend (but not to spend).
Office workers saving the world!
Advertisement:

This is the motto of Dai-Guard, an extremely non-traditional Humongous Mecha anime. Set in the year 2030, the show focuses on three employees of the 21st Century Defense Security Corporation, a company that owns a giant robot named Dai-Guard. Dai-Guard was originally built by the military to protect the world against Heterodynes, aliens from another dimension that show up to destroy everything they can get their hands on. However, the first and only attack occurred 12 years ago, and when the series starts, Dai-Guard has been retired and is seen as little more than an overblown corporate mascot.

When a new Heterodyne suddenly appears, the protagonists — young and brash Shunsuke Akagi, rational and hard-working Ibuki Momoi, and aloof and cynical Keiichiro Aoyama — activate the dormant robot and defend the populace. They become instant heroes, but there is the small matter of dealing with the Board of Directors, who are real sticklers for the paperwork involved in using and maintaining an 80-foot-tall robot. Then they have to figure out who's going to pay for all this collateral damage. Then they have to get some weapons that are not Awesome, but Impractical. Then they have to smooth things out with the military, who want the robot back now that it's actually useful. Then they have to figure out where on the Sliding Scale of Idealism Versus Cynicism they're supposed to stand. And when they finally get things relatively ironed out, things get political. How do you classify a Kaiju attack? Invasion? Disaster relief? Weapons that can beat giant monsters could kick serious ass on the modern battlefield - how does the world's last empire handle a rival having them? What is the purpose of such a military in peacetime, anyway?

Dai-Guard plays a lot of standard trope arrangements, but approaches them from both ends. It puts a Real Robot in a Super Robot package and drops it in alongside the standard crazy monsters from another dimension. It uses common character arrangements, but avoids many anime stand-bys, employing relatively little Fanservice or UST. It alternates its focus between the day-to-day "realities" of a company utilizing a giant robot and said giant robot punching things in the face.

In the U.S., the show was initially licensed by ADV Films, and had a couple episodes air on Toonami for Giant Robot Week. The license went under when ADV Films dissolved, and the show is now licensed by Discotek Media for a pending rerelease.