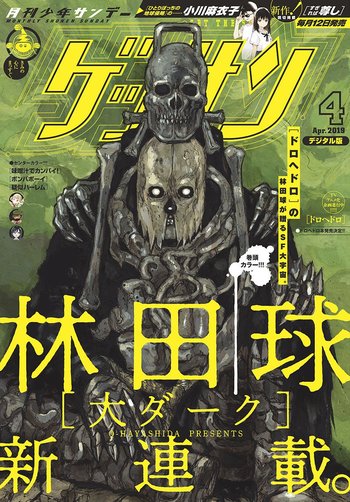 Dai Dark (大ダーク) is a New Weird sci-fi manga by Hayashida Q, the author of Dorohedoro. Just like the mangaka's previous work, it smoothly blends gore, off-the-rocker Black Comedy and a little bit of fanservice with a dark and unusual setting.

Zaha Sanko is a strange man wandering a weird, desolate galaxy, clad in a black rags and carrying a creepy, skull-decorated backpack called the Package of Darkness. His life is one of constant fighting, since he is considered by most people to be the greatest treasure in the universe; not without basis, as it's said his bones can make any wish come true. As such, Sanko has to spend his days fending off bizarre aliens, bloodthirsty space pirates and opportunistic bums who are all after his bones, armed only with the shapeshifting Flesh of Darkness and aided by the Package, in actuality a mechanical being called Avakian. He has only one goal in mind: to find the man who grants the wish, and kill him, thus earning his freedom.

Of course, Sanko's quest is far from an easy one - to begin with, he has no idea who cursed him to have wish-granting bones and why, or where he could find that person. His search is further complicated by Shimada Death, an extremely powerful (and jocular) phantom of interstellar death, and the Solar Mass, a fanatical organization hell-bent on annihilating both of them as incarnations of evil.