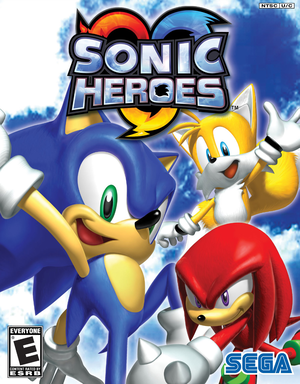 A Tough Team for a Tough Job.
"It's time to crack that Eggman wide open... yeah, let's party!"
— Sonic
Advertisement:

Sonic Heroes is an entry in Sonic the Hedgehog series which was released at the end of 2003. It's notable for being the first Sonic game to be Multi-Platform, having releases on all three sixth generation consoles; prior to this, Sega had quit making consoles and ported several re-releases of older games to the Nintendo GameCube and new games exclusive to the Game Boy Advance (the Sonic Advance trilogy).

Its primary gameplay gimmick is teamwork, and as such the story focuses on four teams of three: Team Sonic, Team Dark, Team Rose, and Team Chaotix. Each team has a Speed, Power, and Flight character with an associated formation. Each formation can be immediately switched with the press of a button.

It was later followed up with Shadow the Hedgehog, which wrapped up the loose threads in Team Dark's storyline.

A teamwork gimmick would also be used in Sonic Advance 3, but with a team of two instead of three and the ability to choose different character combinations.

The real super power of trope-work!