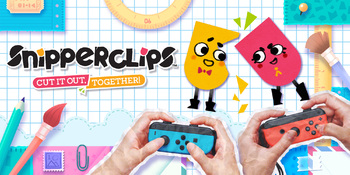 Cut it out. Together!

Snipperclips is a 2017 video game for the Nintendo Switch. It was originally in development as an indie title called Friendshapes before the developers presented it to Nintendo and Nintendo decided to publish it as a first-party title.

Snipperclips is a Puzzle Game/Party Game in which the player(s) controls two (or more) cute characters shaped vaguely like horseshoes. The two characters have the ability to "cut" each other into different shapes. Whenever they overlap, they can cut out the parts that overlap from each other. Using this power, they must cut each other into shapes to solve puzzles. Puzzles such as getting basketballs into hoops, popping balloons, scooping up fish from lakes, helping princesses collect gemstones, keeping goo away from sleeping parameciums, and other strange tasks. Although the game can be played singleplayer, it's primarily designed to be a multiplayer experience.

Nintendo later announced an Updated Re Release called "Snipperclips Plus" which included twice the number of worlds and a remix mode for the existing worlds that makes both players a unique shape. It released on November 10, 2017.