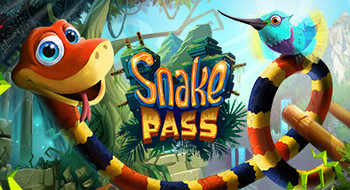 Snake Pass is an action-adventure puzzle game created by Sumo Digital for the Playstation 4, Xbox One, Nintendo Switch, and Microsoft Windows.

In a land known as the Harmony Foothills lives a coral snake named Noodle and his hummingbird friend Doodle. The peacefulness of the land becomes threatened by a mysterious intruder who is stealing the keystones that activate special gates that allow transportation through Harmony Foothills. When this happens, Noodle and Doodle set off to the top of Haven Tor find out who is destroying the gates, find the keystones, and restore peace to the foothills.

In the game, you play as Noodle as you slither around various floating islands in search of the keystones and other pickups such as blue orbs called wisps and gold coins. You can slither around bamboo poles, underwater, and over lava pits in your journey to the top of Haven Tor.

The game was released on all platforms on March 28, 2017 and features a soundtrack by David Wise, composer of songs for games such as Donkey Kong Country.