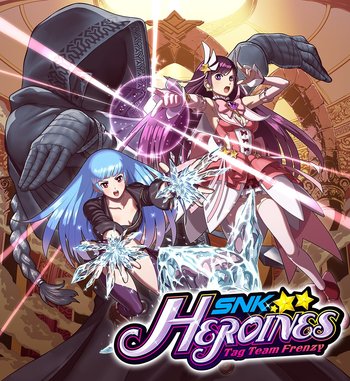 SNK Heroines: Tag Team Frenzy is a Fighting Game by SNK. It was released on September 6, 2018 in Japan and on September 7, 2018 worldwide for the Nintendo Switch and PlayStation 4, with the latter version seeing a primarily digital release in Western countries, though a physical disc was available exclusively as part of a collectors edition package.
Advertisement:

The game is set a couple of months following the events of The King of Fighters XIV where several female fighters, and one male fighter turned into a female, are sent into a parallel world for unknown purposes.

In the months leading to the reveal of the game, SNK ran on their Twitter account a 4koma called Nariyuki Quest loosely based on the game's plot. You can find the entire comic here.