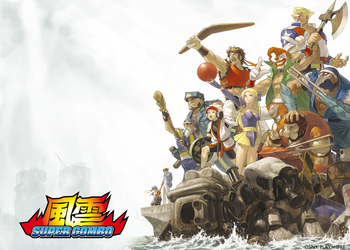 Fu'un is a short series of two fighting games made by SNK for the Neo Geo.

Savage Reign (1995), the first installment, was an hodgepodge of pretty much every popular fighting game series on the Neo Geo, featuring weapon-based combat (Samurai Shodown), large scaling sprites (Art of Fighting), the ability to switch between the background and foreground (Fatal Fury), gimmicky and booby-trapped arenas (World Heroes) along with a much bigger emphasis on ranged attacks. However, the game's stiff controls and dated graphics did not compare favourably to other fighters released around the same time, leading to it being ignored by many.

Kizuna Encounter: Super Tag Battle, the sequel, came out just a year later. It ditched the plane-switching and gimmicky stage design in favour of a Tag Team battle system (indeed, one of the very first fighters to feature one), and a much more combo-friendly system than its predecessor. It is by far the more popular of the two games.

Set in the futuristic Jipang City (which is rumored to be an upgraded version of Fatal Fury and Art of Fighting's South Town), the plot of the series has a mysterious legendary fighter known only as King Leo emerge from out of the shadows of secrecy. Seeking a potential challenge in his own given chance and opportunity, he organizes and sponsors the Battle of the Beast God fighting tournament, promising humongous wealth and legendary fame to the victor. Out of the nine contestants that enter the competition, Sho Hayate is the winner. The tournament is then renewed a year later with a new rule, in which two fighters must join forces and work together as a team in order to gain victory in the new tournament.

Though the Fu'un series isn't as popular as SNK's other fighting game duology, SNK hasn't forgotten about it and characters from the series still occasionally appear in recent crossovers.

The series contain examples of the following tropes: