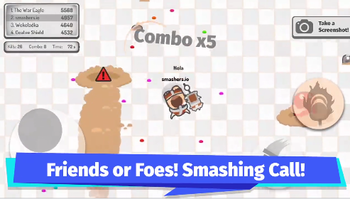 is a Multiplayer Web Game, developed by Clown Games in 2018. As its name suggests, it is about players controlling cartoony people who are fighting each other with comically oversized hammers in a bid to knock multicoloured candy out of each other and get the highest score on the leaderboard in this manner. There are also small grey "mole" things to get whacked, and a large red invincible one that can be comboed for higher score.
Advertisement: