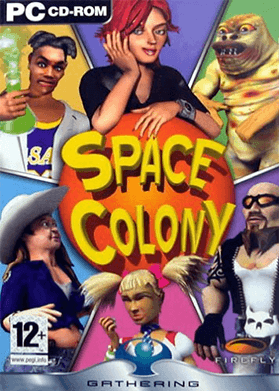 Described by the developers as 'A sim with a real personality!', Space Colony is a simulation game developed by Firefly Studios that places you in charge of a small space colony (fancy that) on an isolated planet, where you gather, process, and sell resources, complete missions, keep your colonists happy, and deal with whatever crises pop up. Best described as a fusion of Stronghold and The Sims.

Gameplay involves placing structures such as mining facilities, assigning tasks to colonists, and then making sure they carry out those tasks properly. You also have to take care of the needs and wants of your colonists, buy and sell resources, furnish the interiors of the biodomes your colonists inhabit, and manage the colony's defense if/when necessary. Eventually, you will have to deal with tourists as well. There are two campaigns in story mode, one military-focused and one civilian-focused, as well as single missions, a freeplay mode, and robust map and campaign editors.

The game has a fansite here

with a demo download and lots of game info. It's also available on GOG.Com for $9.99. An Updated Re-release called the Steam Edition was released on Steam on April 30, 2015.

Your crew of social misfits are: