Standing Between the Enemies 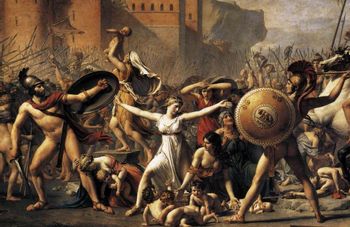 Don't fight! Or, at least, put some pants on.
Advertisement:

Right before a duel, brawl, battle, or war would start between two misled factions, the heroes arrive just in time, give a Battle-Interrupting Shout, and tell everyone to try and be friends instead. They might reveal some sinister Big Bad who manipulated them into the fight, explain to them how the Cycle of Hatred leads nowhere, or just break the ice by being heartwarmingly idealistic. The speech itself may share rhetorical devices with the Whoopi Epiphany Speech, the Kirk Summation, Shaming the Mob or a "Not So Different" Remark.

If it's a fight between two people, more than likely over a love interest, and the love interest or a side character intervenes at the wrong moment, this trope can lead to a What Have I Done moment.

A common subversion is a Shut Up, Kirk! reply from the opposing leaders, who will then start the battle anyway, or for the two belligerents to unite against the interloper trying to tell them what to do. This is often Played for Laughs.

The pacifist counterpart of the Rousing Speech.

I'M NOT LETTING YOU DIE!

Nero's determination to save his father and uncle from killing each other awakens a new level of power, enough to let him intercede.

I'M NOT LETTING YOU DIE!

Nero's determination to save his father and uncle from killing each other awakens a new level of power, enough to let him intercede.