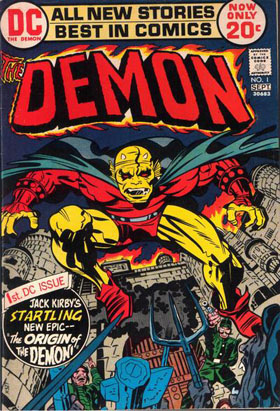 Created by Jack Kirby and appearing for the first time in The Demon #1 (August, 1972), Etrigan has played many smaller roles in several DC comics from The Sandman to Wonder Woman, with occasional stories and miniseries wholly to himself (such as in anthology series Wednesday Comics), and a number of ongoings, including Kirby's original series, a fifty-nine issue run, not counting annuals, during The '90s, and John Byrne's Blood of the Demon.

Etrigan is a yellow skinned and red eyed demon who was summoned by Merlin to aid Camelot against the forces of Morgaine le Fay, who later became a recurring opponent in the series. After the fall of Camelot, Merlin sent Etrigan to roam the earth in the disguise of a man. Depending on the Writer, Etrigan is either bonded to one of King Arthur's noblemen or the human Jason Blood was merely created by Merlin's spell. In the present, Jason Blood, a well respected authority on demonology, is well versed in the skill of magic and has helped other superheroes in several occasions. Etrigan's habit of speaking in verses is a later addition, introduced by Len Wein in DC Comics Presents #66, but really established and explained by Alan Moore. This also makes him fall under almost every rhyme Trope there is.

Etrigan's powers include superhuman strength, speed, durability, regenerative powers, hellfire projection, teleportation, and a high knowledge of maleficium. Jason Blood on the other hand is precognitive, as well as a capable sorcerer himself.

Tropes associated with Etrigan include: