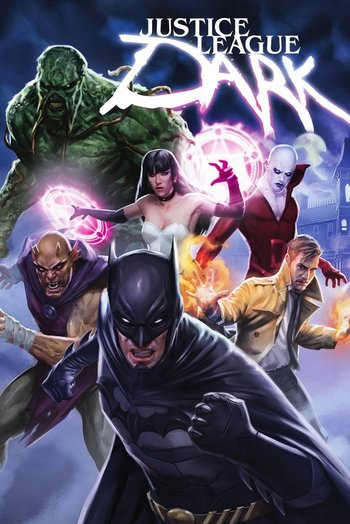 "Are you talking about magic? Then we have to find John Constantine."
— Batman
Advertisement:

When innocent civilians commit mysterious crimes, the Justice League investigates and soon discovers the source is mystical in nature. As it is out of their purview, the League is forced to turn to a team of mystics — John Constantine, Zatanna Zatara, Deadman, Black Orchid, Jason Blood, and Swamp Thing—to help deal with the crisis at hand. Joined by Batman, they must find out what's going on and try to stop it.

Justice League Dark is a 2017 animated film and part of the DC Universe Animated Original Movies line. This movie is based on the Justice League Dark series from the New 52 and set in the DC Animated Movie Universe. Befitting this, Jason O'Mara again reprises his role from those movies as Batman. Other voice actors include Matt Ryan reprising his Constantine role as its title character John Constantine, Camilla Luddington (Tomb Raider (2013)) as Zatanna, Nicholas Turturro (NYPD Blue) as Deadman, and Ray Chase (Final Fantasy XV) as Jason Blood and his other half Etrigan, Roger Cross (24) as Swamp Thing and John Stewart, Colleen O'Shaughnessey (The Avengers: Earth's Mightiest Heroes!) as Black Orchid, Enrico Colantoni (Flashpoint) as Felix Faust, and Alfred Molina (Spider-Man 2) as Destiny.

Despite early reports of being a Sequel Series to Constantine, Constantine: City of Demons is ultimately a Spin-Off of this film.