Western Animation / The Death of Superman 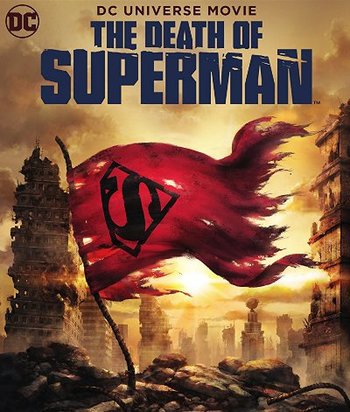 A 2018 movie in the DC Universe Animated Original Movies line and part of the DC Animated Movie Universe, The Death of Superman is an Animated Adaptation of the comic arc of the same name based on the New 52 continuity of DC Comics. It is part of a Movie Multipack with 2019's Reign of the Supermen.

Having had an Offscreen Breakup with Wonder Woman since the events of Justice League vs. Teen Titans, Clark Kent, a.k.a. Superman, is dating his co-worker at the Daily Planet, Lois Lane, but is concerned with what letting her in his world might do to her. At the same time, a mindless monster from another world arrives on Earth and starts rampaging through the United States, requiring the Justice League to intervene—and Superman to possibly make the ultimate sacrifice to stop him.

As it is set in the DC Animated Movie Universe, it features many of the same voice actors returning, including Jerry O'Connell as Superman, Jason O'Mara as Batman, Rosario Dawson as Wonder Woman, Matt Lanter as Aquaman, Christopher Gorham as The Flash, Nathan Fillion as Green Lantern, and Shemar Moore as Cyborg. Among the newcomers are O'Connell's real-life wife Rebecca Romijn (X-Men Film Series) as Lois Lane, replacing Juliet Landau; Rainn Wilson (The Office (US)) as Lex Luthor, replacing Steve Blum; Nyambi Nyambi (Mike & Molly) as the Martian Manhunter; Patrick Fabian (Better Call Saul) as Hank Henshaw; Cress Williams (Black Lightning) as John Henry Irons; and Paul Eiding and Jennifer Hale reprising their respective roles from Superman vs. the Elite and Legion of Super-Heroes as Jonathan and Martha Kent.

You can see the first trailer here

This film and its sequel were rereleased on October 1, 2019 in a Extended Cut Compilation Movie, The Death and Return of Superman. A tie-in digital comic was released which was eventually published as The Death of Superman: The Wake, which has three different plots across twelve issues: the first four issues show Superman in his last few hours before his death, the next four show Jimmy Olsen investigating Intergang during the film, and the last four focus on the Justice League telling stories about Superman as they explore the damage done to the Hall of Justice during Superman's fight with Doomsday.