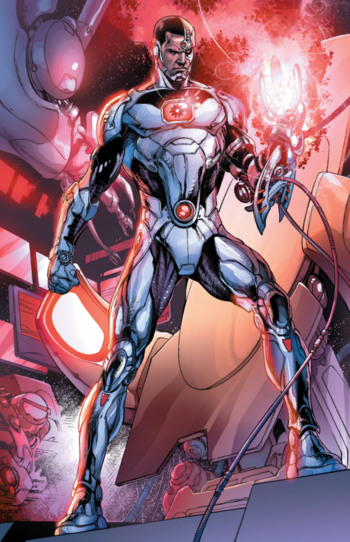 Cyborg is a DC Comics superhero created by Marv Wolfman and George Perez, first appearing in DC Comics Presents #26 in October of 1980. After being injured in a scientific accident that resulted in the death of his mother, high school athlete Victor Stone was outfitted with advanced Artificial Limbs by his father, Silas.

Initially horrified by his new appearance, Victor would find a home and family with the newly-reformed Teen Titans, and remained with the team for a number of years as a charter member. As an adult, Cyborg eventually "graduated" from the team and briefly joined the Justice League of America alongside his former teammates Starfire and Donna Troy. As of the New 52 Continuity Reboot, Cyborg is now a founding member of the Justice League. After 35 years of being a character, Cyborg finally got his very first ongoing comic book, titled Cyborg, in July 2015.

Outside of comics, Cyborg has appeared in a number of adapted works, most notably as one of the main characters of the popular Teen Titans animated series. Actor Ray Fisher plays him in the DC Extended Universe, he appears as a footage cameo in Batman v Superman: Dawn of Justice and is featured prominently in Justice League. A Cyborg-centric movie was in development at one point, but nothing has really come from it.

Tropes associated with Cyborg include: