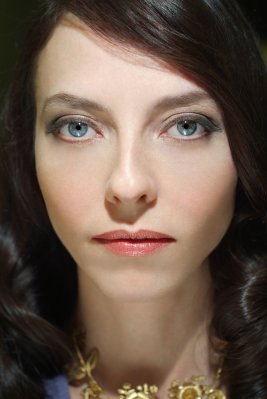 "I love being creative. I love acting, but I also love directing because you get to have a vision for the whole and bring that vision to fruition."
Advertisement:

Juliet Rose Landau (born March 30, 1965 in Los Angeles, California) is an American actress, best known as Drusilla on Buffy the Vampire Slayer and Angel, as well as such movies as Ed Wood and The Toolbox Murders remake. She is the daughter of Martin Landau and Barbara Bain. She is also the newest incarnation of Romana in Big Finish Doctor Who series Gallifrey. She had a recurring role on the fourth season of Bosch.

She is One of Us, being a huge fan of science fiction (especially Doctor Who) and gothic horror (especially anything to do with vampires, which is funny considering the series that brought her to the public eye).