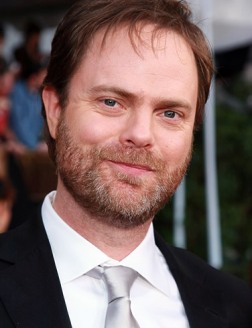 After a career on the New York stage, Wilson moved to Hollywood toward the end of The '90s, and gained some notice for his supporting turns in Almost Famous and Six Feet Under. He was the very first actor to audition for the NBC version of The Office, and easily won the part of Jerkass Dwight K. Schrute, which is still his signature role. He began playing different iterations of his nerdy misfit character made famous with Dwight in films like The Rocker, My Super Ex-Girlfriend and Sahara (2005), but has recently had more dramatic turns in films like Super and Hesher. He's the voice of Gallaxhar in Monsters vs. Aliens as well as Gargamel in Smurfs: The Lost Village. In 2017 he was cast as Harry Mudd in Star Trek: Discovery.

He published his autobigraphy The Bassoon King in 2015. One revelation in the book is that he's actually named after Rainer Maria Rilke.Explanation His father admired Rilke, but then realized that, being in Seattle, "Rainer" would constantly get mistaken as "Rainier", after Mt. Rainier. So it got shortened to "Rain", which appealed to his Hippie Parents, then they decided to add an extra N.