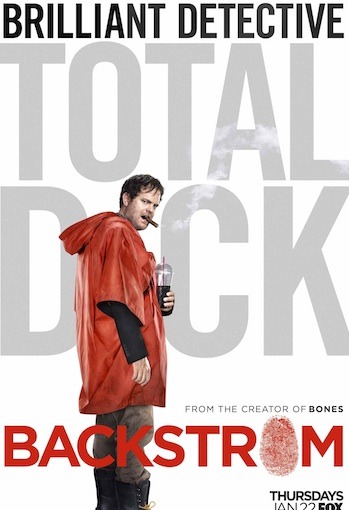 An apt description
"I don't see the worst in everyone. I see the everyone in everyone."
— Lt. Everett Backstrom
Advertisement:

Backstrom is a crime procedural, created by Hart Hanson, that premiered on Fox in 2015 and is based upon a series of mystery novels by Swedish author Leif G.W. Persson.

The show stars Rainn Wilson as Lieutenant Everett Backstrom, a Portland detective whose unapologetic jerkass tendencies leave him isolated and whose poor personal habits threaten to get him fired on medical grounds. He is in command of the Portland Bureau of Police's Special Crimes Unit and leads a dysfunctional crew to solve Portland's toughest cases.

It was originally developed for CBS for the 2013-2014 TV season, but the network passed. Fox picked the show up instead and the pilot was reshot with the role of Gravely being recast. The show was not renewed for another season.

Not to be confused with the 2020 Swedish series.