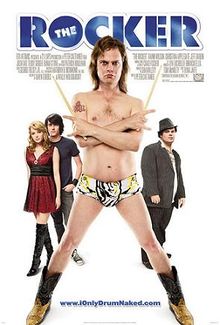 The Rocker is a 2008 comedy starring Rainn Wilson as "Robert 'Fish' Fishman" the drummer for the band Vesuvius. However, when Vesuvius betrays him for a chance to hit the big time, he swears to become bigger than they've ever been...

Twenty years later, his life is down the drain, he's living with his sister, and drumming brings him pain. But when he gets one last chance to live the dream, will he become a rock star, or will he finally be forced to grow up?