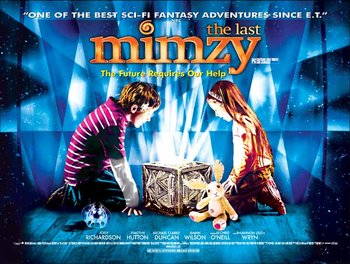 "Today, I'm going to show you a story. Let's all tune in together. A long time ago, the soul of our planet was sick. People had become isolated...warlike. Our world was frightened. It was dying. But a great scientist was trying to save us. He had tried many times, and knew he could only try once more. This was the last Mimzy."
— Teacher in Meadow
Advertisement:

A 2007 film centered around Noah Wilder, a video game-loving, somewhat irritable young man who believes that "school sucks, life sucks, and [he] suck[s]", and his sensitive and precocious younger sister Emma Wilder. While on vacation with their parents over spring break, Noah and Emma find a box filled with strange objects that are incomprehensible to them except for a stuffed rabbit named Mimzy that can communicate with Emma. Sensing that there is something odd about their find, they keep it a secret from their parents, particularly after Noah tries to show a translucent rock filled with constantly shifting green triangles to his mother and it appears to her to be a normal rock. Emma becomes emotionally attached to Mimzy as the mysterious objects begin to give the siblings psychic abilities and increase their mental capacities to genius level. Noah's science teacher Larry and his mystic wife Naomi get involved when Larry notices that Noah has been drawing mandalas, and the situation becomes serious when Noah accidentally assembles the objects into a generator that causes a blackout in the entire city of Seattle. The FBI discovers the source of the surge and the Wilder family members are arrested; meanwhile, Emma has elucidated that Mimzy and the other objects were sent from the future, and it is up to her and Noah to figure out how to send Mimzy back to her own time and save humanity's future.

The film is inspired by the short story "Mimsy Were the Borogoves" by Henry Kuttner and C. L. Moore.