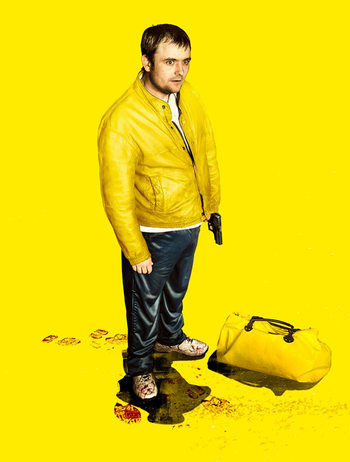 "It's a graphic novel. It's about a scientist who makes a deal with the devil."
"All of us have a mission in life. This is yours, understand? Do you fucking understand your mission?"
— Conran Letts
Advertisement:

Utopia is a British Science Fiction Conspiracy Thriller created by Dennis Kelly that ran for two seasons on Channel 4, the first airing in early 2013 and the second in the summer of 2014.

The story follows four unlikely companions - IT worker Ian, medical student Becky, troubled child Grant and the ever-paranoid Wilson. These characters are brought together by an online forum who come into possession of an original manuscript for the long-awaited second volume of a graphic novel called The Utopia Experiments, written by a Reclusive Artist in a mental asylum who died before it could be published.

However, when the fifth member of their group is murdered by a pair of brutal assassins, the rest find themselves on the run while trying to figure out what secret hidden in the manuscript could be so important and why the shadowy organisation known as the Network want to keep it under wraps.

Also embroiled in the conspiracy are hapless civil servant Michael Dugdale, torn between covering up his bosses' schemes and working against them, and enigmatic Dark Action Girl and Sociopathic Hero Jessica Hyde, who wants the manuscript for her own reasons and who is of considerable interest to the aforementioned hitmen.

The show is unique in the way it's presented and shot. Wide shots are common and almost ubiquitous, and many important details are shown out of focus, forcing the viewer to scrutinize the background, much like characters themselves. The show is also highly oversaturated, which makes the already loud and bright colors (see page image) look almost neon, much like how an artist would illustrate a graphic novel.

An American remake was set to air on HBO with David Fincher and Gillian Flynn as co-showrunners. However, after negotiations with HBO fell through, Prime Video picked it up for a single season with Flynn as the sole showrunner, and released it in late 2020.

Not to be confused with the unrelated Fox reality show or the Australian comedy.

Due to the series' high volume of plot twists, all spoilers for the first season are unmarked. Scroll responsibly.