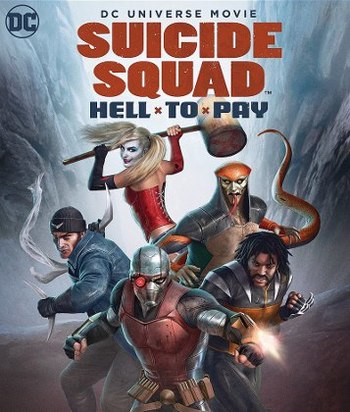 Suicide Squad: Hell to Pay is an American animated film produced by Warner Bros. Home Entertainment. It is the thirty-first film in the DC Universe Animated Original Movies series and the second story based on the Suicide Squad antihero team. Although Batman: Assault on Arkham previously featured the Suicide Squad, that film is set in the Batman: Arkham Series video game universe and this is part of the DC Animated Movie Universe. The voice cast includes Christian Slater reprising his Justice League Action role as Deadshot, Tara Strong reprising her role from Batman: Arkham City and onward as Harley Quinn, and Vanessa Williams as Amanda Waller. The film was released digitally on March 27, 2018, and physically on April 10.

The Suicide Squad tries to find a powerful mystical object. Task Force X, consisting of Deadshot, Harley Quinn, Killer Frost, Bronze Tiger, Captain Boomerang and Copperhead, are racing and battling against other villains for the object.

A sequel comic serial by the same name debuted in late March 2018.

Example of:
Living on Borrowed Time