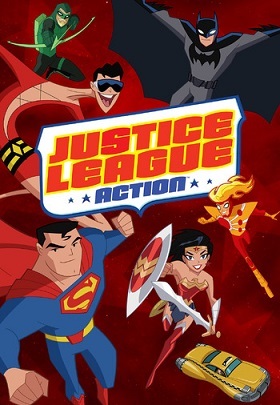 Justice League Action is an American superhero animated series airing on Cartoon Network. Based on the Justice League of America franchise from DC Comics, the series features a revolving door roster of superheroes teaming up to battle threats too great for any one hero to stand against.

The series is notable for featuring the televised return of Kevin Conroy as Batman and Mark Hamill as The Joker, with the two actors reprising their roles from the DC Animated Universe.

The show premiered in November 2016 in the United Kingdom and in North America the following month. A web series, "Justice League Action Shorts", began airing on the DC Kids' YouTube channel on June 2017.

The series has a very loose continuity, so while it can be watched in any order, little details fall into place better if watched in episode order.

Ultimately, due to horrendous scheduling and lack of advertising on the part of Cartoon Network, the series failed to attract an audience and was canceled in 2018 after only one season.